This week’s adventures featured the last of the bird point count surveys on the Blackwater Rail Trail. Highlights included birds that were already proving that post breeding dispersal and failed breeding movements are starting to occur. Post breeding dispersal occurs when species have finished up their nesting for the season and disperse out from their territory into other parts of the species’ known breeding range. Birds will also be found dispersing out if their breeding attempt is unsuccessful, something I commonly note with grassland breeding birds in the area.

Many grassland breeding species have failed nesting attempts each year associated with the timing of hayfields being cut. Both types of dispersal lead to observers finding birds out of their normal habitat during the mid-summer months before migration ramps up.

This week I noted Red-winged Blackbirds, a species that does not nest along the rail, which was likely a byproduct of the failed breeding dispersal. Other highlights came in the form of a Belted Kingfisher along the river, a Purple Finch, and a Black-throated Green Warbler that has been on territory each time I have done a point count survey. 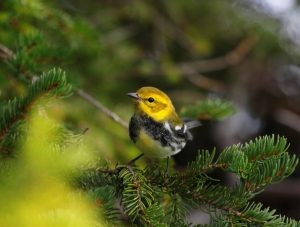 A Black-throated Green Warbler I saw previously in the area

I got out when the weather allowed and conducted more butterfly surveys which led to another interesting discovery. On Saturday morning I was conducting a survey along the rail trail and was able to find what appeared to be a Northern Azure, and upon confirmation from the authority on Azures, it was indeed a Northern Azure. This species was thought to be univoltine (one brood/flight per year) in our region, likely emerging in April and flying through May around the Blackwater. I hope to document more individuals soon to better understand this flight as I was only able to digiscope a picture with my phone through my binoculars. 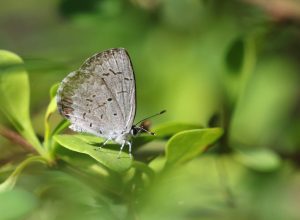 Here’s a Northern Azure from earlier this spring for reference, note the charcoal-colored marginal band

My monthly trip to the Beall Tract to do some butterflying commenced this Saturday with three participants attending. Some of the notable butterflies found on a previous scouting endeavor earlier in the week continued. as I was able to show the participants Pink-edged Sulphurs, and Harris’s Checkerspots that were still on the wing, both specialties of the area. Keep an eye out for the August edition of this trip and join me for more butterflying at the Beall Tract! 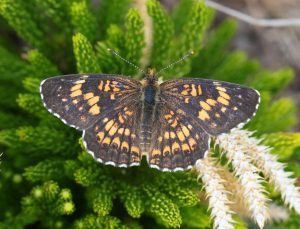 A Harris’s Checkerspot from the June trip, fresher looking than the ones we saw on Saturday 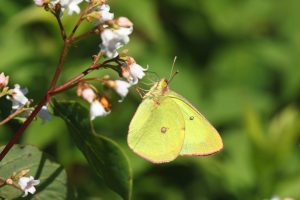 I’ll end with another dragonfly as a photo highlight, a female Widow Skimmer. This beautiful yet common dragon can be found in a variety of habitats, so keep your eye out for this species when you’re out. I found the individual pictured below out in the fields along the Beall Tract, where it could have come up from the portion of the Blackwater River that these trails run along. 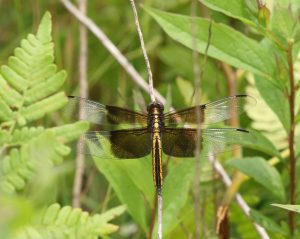