This week I completed my first bird transect, that fell along the Thomas section of the Blackwater Rail Trail.

July is an interesting time of the year to be out birding as you can note the breeding behavior of birds and start to see the first trickling of bird movements. In saying this, July is also one of the most underbirded months of the year so I encourage my readers to check out this months eBird challenge to encourage you to get out in the field more this month!

Along the Rail Trail this morning I noted breeding behavior when watching a Northern Flicker carrying food to a nest cavity. I observed the Yellow Warblers I have been watching throughout the summer here were feeding their recently fledged young, and there was a family of Blue Jays feeding their young as well.

Jays are a species that you should be cautious when going to confirm as they often will be carrying food around, but not always to their young, but perhaps to stash that morsel away for later consumption. However, watching a parent feeding their young is a clean-cut confirmation!

As I mentioned, the first movements of bird migration occur in July, I saw this for myself when I observed a Spotted Sandpiper at the base of the dam in Thomas. Shorebird migration gets into full swing by the end of July and the first individuals can be noted early in July! 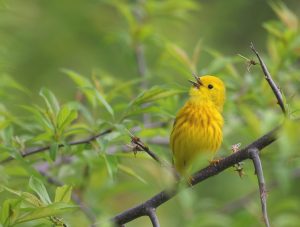 On Wednesday, I led a birding and butterflying walk along the Blackwater Rail Trail in Douglas, and made several interesting observations with the participant who joined me for a morning stroll. Birding highlights included watching a family of Canada Warblers. And

we had butterfly highlights that included the observation of a Black Dash! This is a species of skipper that is ranked S1 in the state of West Virginia which means it is state endangered. I have included a list to state ranked species in West Virginia here for those interested. This skipper was the first record for Tucker County that I have been able to find, as this species is only known from the Cranesville area of the state. 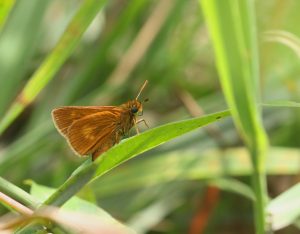 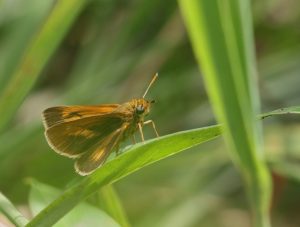 A view of the Black Dash spreading its wings halfway, something skippers often do to sun themselves.

Despite a shorter work week, we were still able to fit in several findings! Thursday the misty and overcast conditions provided my coworker Frank and I had the appropriate conditions to check some areas we thought held promise for Green Salamanders. There had been no proper documentation of this species in Tucker County until Frank called out that he had one, while we were searching a large rock formation within the Blackwater Canyon! This species was likely able to find its way into the Canyon since while they favor rock formations, they have also adapted to be arboreal, and could have moved up through the Canyon since it is a region of continuous forest. 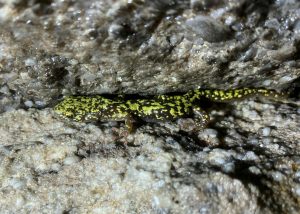 I spent the following week on vacation with my girlfriend and her family in Myrtle Beach, South Carolina, but still made it out and got to see a variety of species that we don’t find around the Blackwater watershed. I’ll finish this post with a few photos from my adventures from parts south. 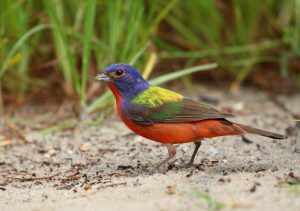 A Painted Bunting along a walkway at Huntington Beach State Park 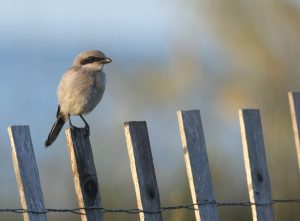 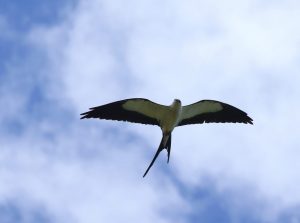 Swallow-tailed Kites are an elite bird of prey, and a treat to see in good numbers