Another short week for me paired with good weather led days filled with field surveys.

Bird surveys led to picking through multiple flocks of passerines, a testament that fall is right around the corner, and in my opinion is quite welcome. Places along the Blackwater Rail Trail were abundant with groves of Staghorn Sumac which attracted an abundance of birds. American Robins, Cedar Waxwings, Purple Finches, and Rose-breasted Grosbeaks were a few of the species that could be found foraging on these berries. This female Purple Finch below was one of the components of these flocks. 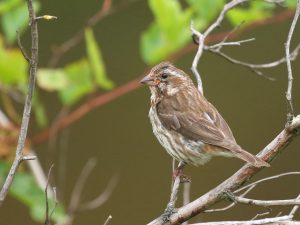 It was interesting to compare a female Purple Finch with an immature from this year’s brood. Since the Purple Finches were usually in small flocks, I presume that the family groups are still hanging out together. Note on this individual the fleshy gape at the base of the bill paired with shorter streaking to the patterning when compared with the adult female Purple Finch. 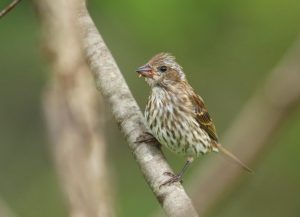 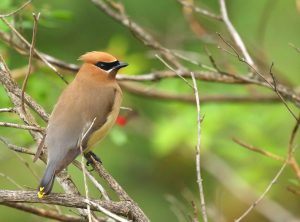 Cedar Waxwings were also a major component of these flocks. Cedar Waxwings love to raid a variety of different berry-producing woody plants when they are not manning the tops of snags in search of insects. 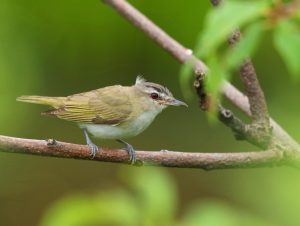 While Red-eyed Vireos might not be serenating the woods as they were a month previously, they are certainly still around and can be found in most foraging flocks.

On one of the morning bird surveys I encountered on-and-off rain showers so I did not drag my camera along that day. Warbler diversity was abundant on one of the transects, with the scrubby hillside mixed with old apple trees in between Snyder Run and Snyder Run Road along the Blackwater Rail Trail providing crucial habitat for dispersing birds that are trying to fuel up before starting on their migration south. I am sure this area will produce good migrants this fall. Check out what I had the other morning on this eBird checklist: https://ebird.org/checklist/S116220905

While the early morning hours were occupied by birds, it was nice to spend the rest of day out in the field with the butterflies currently on the wing. While overall diversity of butterflies has fallen off from its peak in June, there are still plenty of good finds to be made.

The continued push of butterflies from parts south was noted while I completed butterfly transects this week. A species I did not expect I would find on these transects or even in this region, the American Snout. I noted 2 different individuals of this species that utilizes Hackberry. 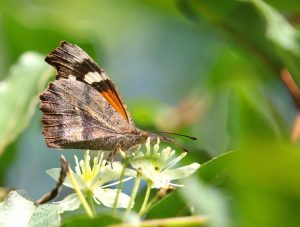 The American Snout is named after its elongated palpi that resembles a long snout. The Snout is another butterfly that cannot survive our winter weather, thus only establishing temporary populations.

Skippers provide additional highlights while I conducted transects this week. The Blackwater Rail Trail in front of downtown Thomas held several Sachems now this week and were joined by a transient Fiery Skipper, showing up under the same circumstances as Sachems but less frequently.

Another skipper highlight was finding a Common Roadside-Skipper near the slab that is the remnants of the former railroad industry that occurred right along the Blackwater Rail Trail. This does strike me as the driest site along the Blackwater Rail Trail due to the openness and occurrence of mine spoils leaving exposed, barren ground, but I was still surprised to find this species here, or even in the county for this instance. 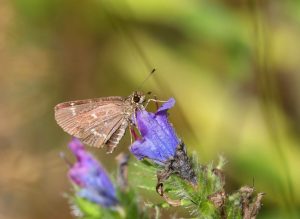 I am not familiar enough with this species to know if it wanders, so it was an exciting to make the observation of this Common Roadside-Skipper. This is a species that I typically think of finding in dry sites in the Ridge and Valley Region east of the mountains in the rain shadow of the Allegheny Plateau and Front.

Additionally while I was conducting my butterfly surveys I made it a point to photograph the abundant Common Ninebark that has went to fruit along the Blackwater Rail Trail. It was a new photo species for me! 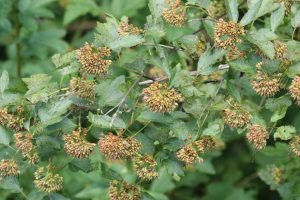 While it was a three-day week for me since I went to help Maryland Biodiversity Project get the Dan’s Rock morning flight bird count on the ground and running, I still had several adventures that I found to be exciting. While this was on my way home from work one day, I decided to include an evening stop I made at Silver Lake as I would not have stopped if I hadn’t gone to work that day!

Here I found what I believe to be Spearmint in flower along the lakeshore and was attracting butterflies as mint flowers tend to do. Pearl Crescents were around but I noticed a noticeably larger crescent. Upon closer inspection of the antennae clubs (the thickened antenna tips), I noted the undersides to be almost completely orange, the only decisive field mark that can be used to identify male crescents in the field. 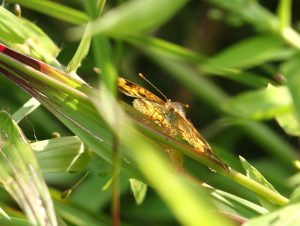 The decisive look and photo you need to get to confirm a Northern Crescent. It must be noted that the presence of Northern Crescent in the Appalachians is in flux and could be some sort of cryptic species. A lot is still to be learned and I find that exciting on its own! 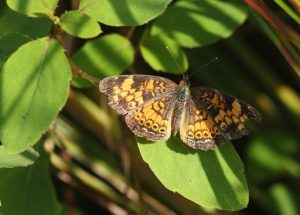 From above, Northern Crescents look like your standard Pearl Crescent, still ever so beautiful.