After a few days’ leave to help with the Maryland Biodiversity Project’s Dan Rock morning flight bird count, I returned to a week where the weather cooperated for outdoor adventures around the Blackwater watershed.

When a cold front moved in on Thursday, we saw the first true signs of fall around the Canyon. Winds out of the northwest led to low temperatures and the first influx of migrant birds. Local flocks included recently arrived components, once again including what previous years would be an early Tennessee Warbler, yet with reports almost daily and seeing several while counting at Dan’s Rock, seems to be a thing to now see them in early August on and around the Allegheny Plateau.

Another highlight was noting that Belted Kingfishers do indeed breed along the Blackwater Rail Trail. On Friday morning I observed a male Kingfisher along Snyder Run. When alerted to my presence he flew down to an exposed rock in the river where his two presumed young sat side-by-side. As with most kingfishers, they proved to be quite jumpy, and I never got any great shots.

However, I was able to get good shots of other species this week. While completing a butterfly survey along the Blackwater Rail Trail in Douglas, this Common Yellowthroat popped up out of the vegetation while I was looking at some swallowtails. 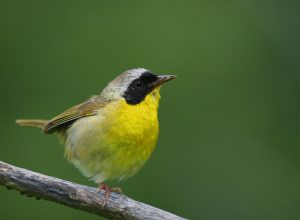 Common Yellowthroats are abundant in the ample riparian habitat right now, with their numbers being boosted at the moment due to the young still hanging around with their parents, leading to seeing a family unit of 4-6 birds as a common sight at the moment.

Other family groups of birds can be seen along the Blackwater Rail Trail right now as well. I came across a family of Indigo Buntings that were all defending a scrubby patch and were agitated by my presence. I thought it was interesting behavior to note the young joining in with their parents to help defend their territory. 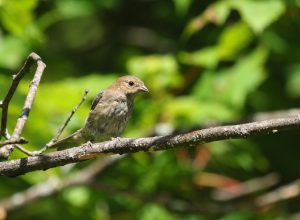 This was one of the Indigo Buntings around that patch. Tough to say due to this individual’s ratty appearance but I would say this is a female and not a young male due to the lack of any blue spotting appearing. Males of this species are a lovely shade of blue, especially when in the right light.

Butterflying this week continued to be productive. My two favorite spots to butterfly on the Blackwater Rail Trail have shifted from my early summer preferences. Currently I have found the stretch of the trail in front of historic downtown Thomas and the area around “the slab” where some of the railroad buildings formally stood.

Downtown Thomas continued to produce sightings of immigrant species and species that favor disturbed areas. Here, another Fiery Skipper was noted along with another Sachem. 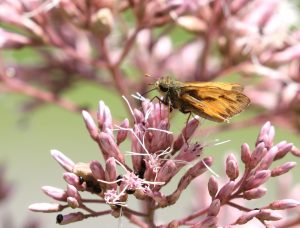 Fiery Skippers have become a favorite of mine due to their cute appearance and small size. 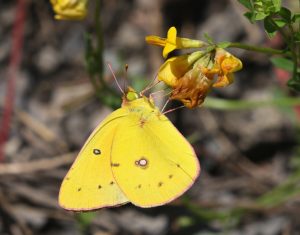 I also noted several fresh Orange Sulphurs along this stretch of trail like this one posted above.

The stretch of trail located near the slab has been loaded blooming Hollow Joe Pye Weed, standing tall and often filled with swallowtails. I counted over 50 swallowtails on one of my half mile butterfly surveys like this Eastern Tiger Swallowtail pictured below. 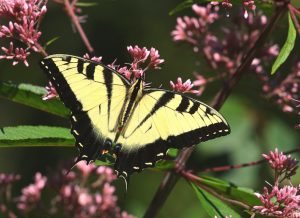 It is also good to keep an eye out for the dark morph of the Eastern Tiger Swallowtail like the one pictured below. These are larger than our other dark swallowtails and have the orange spots restricted to the marginal area of the underside of the hindwing. 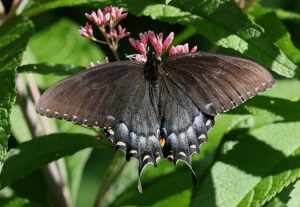 The highlight of the butterfly surveys also came from the open meadow area around the slab where I recorded what seems to be the northern-most record for the state of the Common Ringlet. Though introduced to the highlands of West Virginia, this species is right at home here and does not seem to be negatively impacting any other species. This species is expanding in the Northeast and with an individual now being recorded in Thomas adds continued hope for Maryland butterfly enthusiasts that this species will naturally occur in the state, as appropriate habitat exists in the southern tip of Garrett County, not far at all from this sighting. Only time will tell. 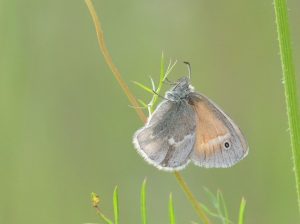 Butterflies were also highlighted in our ecotour offerings this week as I led a butterfly walk for Friends of Blackwater and as a volunteer for Canaan Valley National Wildlife Refuge. Participants joined me for a loop around the Beall Tract where we found several species taking advantage of the ample nectar sources like this Common Wood-Nymph on Elm-leaved Goldenrod. This species is common around the edges of overgrown fields as the eyespotted light tan outsides of the wings can be seen flopping around these areas.

My personal highlights came in the form of another wandering species plus seeing the only species of Copper in Tucker County. The wandering species was a Common Buckeye, with this individual being very worn, perhaps the effects of riding the winds in from parts south. The Common Buckeye’s eyespots remained intact despite its heavy wear. 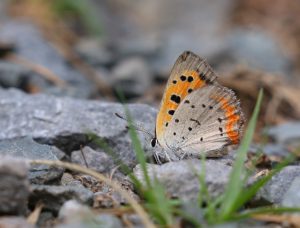 In addition to the Buckeye, this American Copper added uncommon color to our butterfly sampling on a fine August afternoon.

I will end this week’s posting with another sighting from my adventures along the Blackwater Rail Trail. This Powdered Dancer was something needed in this week’s posting to ensure the odonates were not pushed to the side – as their colors and patternings never cease to catch my attention. 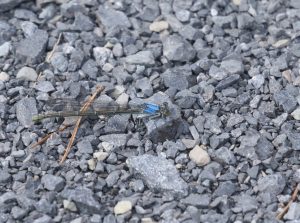