My week began early Tuesday morning at the Red Creek Campground.  As soon as I stepped out of my car, Cape May Warblers and Blackburnian Warblers were already shooting overhead — heading southwest. I quickly made my way out to the bird banding station — although that operation will be starting a week late this Fall.

However, in addition to banding, there are other interesting ways to measure the number of birds that pass through this site. Let’s look at one in depth – “Morning Flight.”

“Morning flight” counts offer the best method to precisely measure the number of birds that pass-through a given site in a single season. At Red Creek, the banders who operate this station have noted on a normal day, they only catch 2% of the birds that move through this location.  A morning flight count can get a more exact representative sample, through counting all the birds moving through, with an experienced counter being able to identify most species.

It is well known that many of our songbird species, including warblers, thrushes, and sparrows, are nocturnal migrants. After a long night of flying, birds often land in a place where food and safety are available. Sometimes a desired habitat is directly below where the birds are flying. Other times, a bird needs to keep flying to find suitable habitat. This phenomenon, known as redirected migration, or “morning flight”, can be observed after a night of heavy migration.

Along the coast of Cape May, New Jersey, birds that fly over land at night occasionally end up over the water. Because they are uncomfortable over the open ocean, they fly back the way they came, which brings them back to land. Since the Cape sticks out into the water, this is often the first land the birds encounter, so they fly towards it and take cover. At Higbee’s Beach Wildlife Management Area in Cape May, a count of these morning flight birds is conducted every fall. In an area like Pennsylvania, a smaller number of birds also engage in redirected migration, but the reason behind it is unknown. There is no ocean to account for birds to be heading west, but they tend to fly that direction anyway.

Although we may not be able to understand the motives behind morning flight, it provides an excellent opportunity for birders to find unusual species. Unlike finding birds on the ground, birds in flight are not confined to specific habitats. For example, on September 9, 2010, I observed a Red-breasted Nuthatch, a Hooded Warbler, and several Bobolinks in morning flight over the course of a few minutes. Normally, these birds would be in very different habitats and would not be found together. Another interesting aspect of watching birds in flight is that the density of migrants is usually much higher than in the trees. On a good morning flight day, it is not uncommon to see at least three times as many warblers in flight than on the ground.

At the banding station location near Red Creek, the first big push of birds up through this geographically favorable area for movement up over the ridgeline was happening. It was already evident that there was going to be sufficient movement today, with Cape Mays and Blackburnians being the main component to this flight.

Within these pushes I often find myself snapping flight shots of birds that catch my attention as different and go back later to confirm my suspicions of what it was. This shot was a prime example: 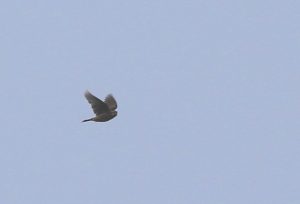 While not a good shot, finding a Dickcissel in morning flight is a rare sight in Appalachian morning flight. The distinctive face pattern gave this guy away as he trickled through with the other birds headed up over the ridge to the southwest.

This was not the only interesting find of the morning; later a Yellow-bellied Flycatcher shot by in one of the flight lines, with its yellow wash fading up into the throat from the underparts standing out in the increasingly good morning light.

The two main components of the “morning flight” would occasionally land in the one spruce tree I was standing by. I saw at least twenty species of warbler in this one tree alone.

A Blackburnian Warbler working the Red Spruce before taking off giving it’s “zeep” call as it headed to the southwest. 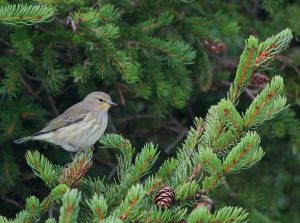 Cape May Warblers can appear in an array of plumages, but even the drabbest, usually first year females, show a yellowish-orange wash in the face, sometimes barely noticeable. This was one of just under 400 individuals I saw that morning.

I continued my sit throughout the morning and into the afternoon, as the Cape May Warblers continued to fly through till about two o’clock, with occasional other species mixed in. One was an Olive-sided Flycatcher. After having a potential one earlier in the morning, I got a look of one that almost had already made it past my position — but I was still able to note a larger stocky flycatcher with a heavy-looking and dark vest washed through the breast, and clean white patches on the side of the flank, ruling out an Eastern Wood Pewee.

While swallows are not a common part of the morning flight at this location, I saw a trio of Purple Martins around noon, followed not long after by a few Barn Swallows, with a migrant Bank Swallow mixed in.

The northwest winds kept me occupied with ample migrants — 54 species that Tuesday morning. The full list of what I saw that morning is on this eBird checklist: https://ebird.org/checklist/S117448379

After a good night of camping, and a nice evening spent exploring some areas of the Sods, the next morning once again was a good morning to be out birding.

But first, a photo from the evening before: 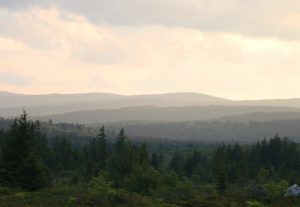 An evening view looking to the southwest of Bear Rocks. This is what birds who decide to come up and over at this less favored locality than the Allegheny Front Migration Observation see as they work southwest.

A Cedar Waxwing perches atop a Spruce as the last bits of light wane from the edges of the Sods.

Wednesday morning offered better lighting conditions with similar numbers of birds compared to the morning before. I took the time to get some flight shots to help readers learn that warblers in flight are indeed identifiable to anyone willing to take the time to learn them.

There are a few things to look at, such as the size and structure. Was it a plump and heavy chested warbler with a short tail but long undertail coverts like a Connecticut Warbler? Or did it have the sleek build of a Blackpoll Warbler that has a longer-winged look to it? This species has been recorded to fly for extraordinary amounts of time for a bird of its small size.

What overall colors did you note, the greenish underparts contrasting with a clean white undertail covert on a Tennessee Warbler, or a bird with a striking black back against a flame orange throat and face of a Blackburnian Warbler?

The type of flight call can aid in or identify the bird as well. Was it the high and thin “seet” of a Cape May Warbler, or the buzzy, distinctively rising “zweedt” of a Northern Waterthrus? Several features that are distinctive on the ground can also be used to aid in the identification of the individual, such as the necklace of black streaks contrasting against the bright yellow belly of a Canada Warbler, or the white handkerchief at the base of the primaries on the wing of a Black-throated Blue Warbler, something that is visible as these birds move through. 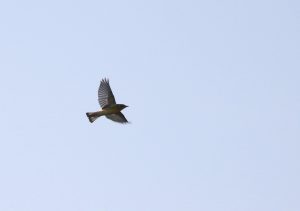 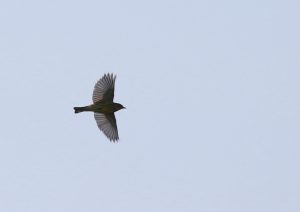 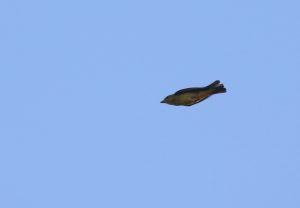 While not a warbler, Scarlet Tanagers are also distinctive in flight, with both sexes sporting the clean black wings either contrasting with that of the scarlet red body of the female or greenish-yellow body of the female.

The Wednesday morning flight did not continue until the afternoon, as it had the previous day — perhaps due to lighter winds facilitating less movement and more quickly rising temperatures. I decided to leave my post earlier than the day before, but I still had an excellent morning with my full eBird list being found here: https://ebird.org/checklist/S117507672

Hopefully reading the excitement that “morning flight” birding can offer even early in the fall migration inspires readers to give it a try themselves — or join me for a future outing to observe birds in visual migration!