After 18 months of monitoring and a series of meetings with state, business and non-profit partners, we are closing in on a first draft of the Beaver Creek watershed-based plan.  In order to receive grants from the EPA targeting restoration of the waterway, we have to have a watershed based plan, so this is the first step for any potential future restoration work.

Along the way we have discovered some interesting things.  For example, some of the small and heavily forested tributaries of Beaver Creek are highly acidic, despite the general lack of acidifying chemicals in the water.  Apparently this is in part due to the Pottsville sandstone geology – common to the southern headwaters and upper tributaries areas of Beaver Creek (between A-Frame Road and Mt. Storm Power Plant) – having very low buffering capacity, thus providing minimal natural protection against acid rain.

We are excited to see the impact of the West Virginia Department of Natural Resources’ liming efforts on Beaver Creek.  They have been periodically dumping tons of limestone sands into acid mine drainage seeps and tributary streams to try and raise the pH in the Beaver Creek main stem.  Data show that their efforts are proving successful and keeping the pH above 6.  There are many aquatic species that won’t tolerate a pH below 6.

Limestone sands have their limitations.  A constant resupply is needed as the sands get washed away by the stream, and the liming does not address metal precipitates. Improving the pH is important, but Beaver Creek also has temperature issues which will eventually need to be addressed. That said, DNR’s work shows that it won’t take an overwhelming and unrealistic push to bring Beaver Creek back to a more functioning ecosystem.  That’s good news! 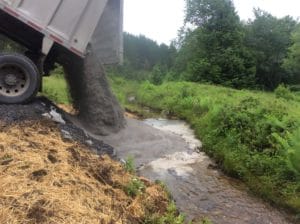 Dumping limestone sands into a tributary.