Ronald Lewis, a distinguished historian from West Virginia University, has written a colorful new book that tells an exciting tale of human conflict from the early days of Tucker County’s timber industry.

The central incident in Lewis’ book, “The Industrialist and the Mountaineer,” published by West Virginia University Press, is a “Wild-West-style” gunfight in Parsons in 1897, when an exchange of pistol shots in a passenger car on the West Virginia Central and Pittsburgh Railroad left one man dead and another wounded.

The dead man was a wealthy sawmill owner, Frank Thompson, age 35, who had prevailed in court against the wounded man, Robert Eastham, a rough-and-tumble logger and farmer who led the crew that cleared the land for the Town of Davis.

Eastham was a Confederate guerrilla who moved to Canaan Valley in 1876 and became a renowned hunter and woodsman.  Frank Thompson, the man Eastham killed, was part of a New Hampshire timber business family who came to the region to join in the industry that Henry Gassaway Davis began.

Eastham tried to use the courts to keep the Blackwater River open for his logs, but Thompson won the case – so Eastham used dynamite to blow up Thompson’s dams.  Lewis’ book is based on court and newspaper records that document the longstanding feud between the two men.

On March 18, 1897, after a trial in Parsons, Eastham struck and insulted Thompson.  Thompson drew and fired a pistol. Eastham was ready for the exchange, and fired back through his coat pocket.  When the smoke cleared, both men were wounded, but only Eastham survived.

Eastham was prosecuted for instigating the shooting. High-powered lawyers represented both sides, and the courtroom antics were almost as exciting as the shoot-out.  After Eastham was convicted of a lesser charge, he escaped from the Tucker County Jail and fled to Virginia, where he lived to a ripe old age.

Lewis presents the case as “modern business type” Thompson versus the “old-time traditionalist” Eastham.  But Eastham was hardly an admirable character; he comes across as a lawless bully whose violent temper and racism led him to kill an African American Union Army veteran in Virginia.

Frank Thompson’s family lost their son, but they continued to have strong Tucker County business interests.  Thompson’s sister Sarah Maude donated 3,149 acres in Tucker County to the State of West Virginia, which was the genesis of Canaan Valley State Park.

Appalachian feuds, with their prickly ideals of honor and violent duels, are a staple of history – and this Tucker County feud story that Lewis tells is readable and exciting.  Pick up a copy and enjoy! 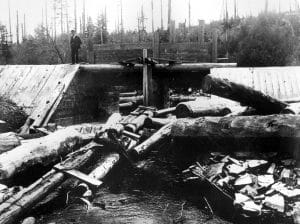