Friends of Blackwater works to protect rare and endangered species.

Thanks to many generous supporters, Friends of Blackwater is continuing to support research on “Ginny
the West Virginia Northern Flying Squirrel, conducted by Purdue University researchers on the Monongahela National Forest.

The intent of this year’s study was to humanely capture flying squirrels and fit them with radio collars, allowing researchers to then track the squirrels using radio telemetry and learn how squirrels move across the forest landscape.

However, “Ginny” and her friends are proving difficult to catch, and months of research has only resulted in a couple successful captures. Flying squirrels are small, nocturnal, and spend most of their time in the trees in remote areas. These characteristics, combined with low population density, makes capturing and tracking the squirrel difficult.

In the past, Friends of Blackwater sponsored research that relied on using hairs left behind by flying squirrels for genetic analysis, which could provide useful information about the squirrel’s diet. The main advantage of this method was that the squirrels could enter and exit a nest box or other structure and leave behind hair without the researcher being present, making timing less crucial. However, the hair sample study couldn’t tell us much about how flying squirrels utilize different habitat areas and move through the forest, which is why this round of research focused on telemetry.

We continue to support this research, because despite being removed from the endangered species list, northern flying squirrels remain a very rare and sensitive species. The Monongahela National Forest contains the majority of their habitat, and therefore research and informed management decisions within the Forest are crucial to “Ginny’s” survival. 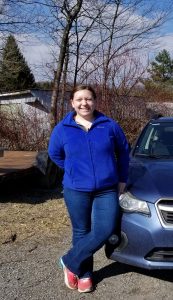 Above, flying squirrel researcher Ashley Archer poses with a car that Friends of Blackwater loaned her.