On August 4th, the President signed the Great American Outdoors Act (GAOA) into law. The GAOA is groundbreaking legislation that will improve trails, campgrounds, and other recreation in public lands across the United States. Now that it has become law, the National Parks and Public Land Legacy Restoration Fund will be created and the Land and Water Conservation Fund will be fully funded.

The LWCF supports outdoor recreation and conservation programs around the country, including  millions of dollars for projects right here in West Virginia. Both Blackwater Falls State Park and Canaan Valley State Park have received LWCF funds, as well as the Monongahela National Forest.

Thank you to all of the lawmakers who helped make this possible – with special thanks to Senator Joe Manchin for his leadership in securing passage of this landmark legislation, and to West Virginia’s delegation (who voted for it unanimously)!

If you want to review the GAOA in full, you can find it here: Great American Outdoors Act – Full Text

With your help, Friends of Blackwater has been advocating for the Land and Water Conservation Fund for years by sending letters to legislators, lobbying for this much needed legislation, and working hard to protect these public lands that need maintenance. The deferred maintenance in National Forests, State Parks, National Refuges and other federal lands can finally be addressed!

Below you’ll find a full-page ad thanking Senator Manchin for his leadership, from organizations all around West Virginia (including Friends of Blackwater). This ad was published in both Morgantown’s Dominion Post and Charleston’s Gazette-Mail newspapers on Sunday, August 9, 2020. 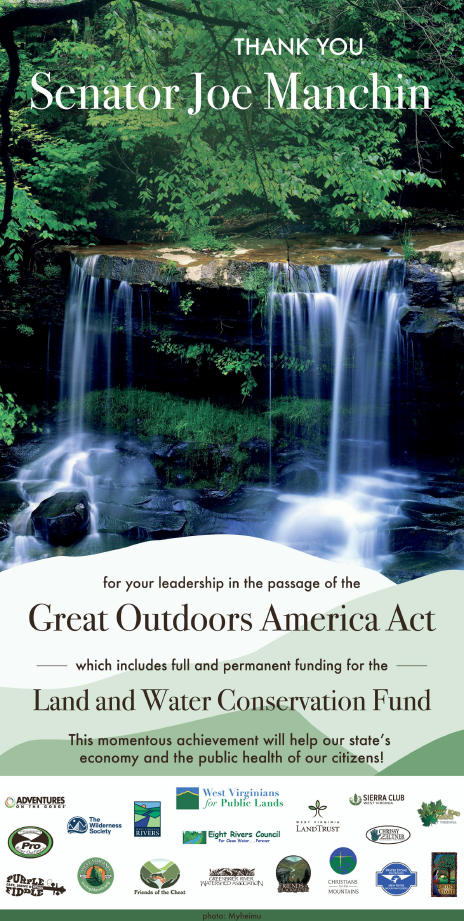