A hundred-plus-year-old red brick former coal company headquarters, that is now owned by the Town of Thomas, has received a major upgrade, thanks to a grant secured by Friends of Blackwater and the Vandalia Foundation.

The massive Davis Coal and Coke Company Engineering Building on the Douglas Road sits directly across from the restored Buxton and Landstreet Company Store, which once served thousands of local families in the heyday of the coal industry, and is now owned by Vandalia. The Engineering Building was used for coal mine planning, payroll, and railroad operations.

Thanks to funding secured from the West Virginia State Historic Preservation Office, the Building’s basement and first floor have been completely repaired and stabilized by expert historic restorers from the “Past Respects” company, owned by Frank and Sherri Unger of Spencer, WV.

Rubble in the basement was removed and the floors and walls were restabilized.

Sherri and her daughters spent two weeks gutting the flooring, while Frank worked to stabilize supporting walls in the basement. There were a total of four different layers that held the base of the Building together, including brick that acted as a stabilizer.

Now that the restoration stage of repairing and stabilization is done, one can see how the building – state of the art for the era – functioned as the command center of a huge workforce of laborers and craftspeople of every description – from miners to teamsters, from trackmen to engineers, from masons to  clerks.

Hundreds of workers would crowd into the high-ceilinged office areas to receive their pay at a window. Scores of railroad clerks tracked company store inventory, equipment, and items arriving and departing by rail.

The rotted floors on the first floor were removed and replaced.

The restorers from Past Respects preserved the heritage artifacts they found — like ledgers and transaction sheets — even old railroad magazines were found in storage closets.  And, not to  mention, the custom pine boxes built to hold several eighty-pound “core drill” samples — long, heavy rock cylinders of layered stone and coal, that are cut and drawn from the land by a drill rig to measure where the best coal lay, deep in the earth.

Any brick in the Building that was salvageable from the first floor was used as a walkway in the basement. Coincidentally, any additional brick that was found, has the name of the Western Maryland Railway printed on it!

Friends of Blackwater has been very excited about working on this valuable restoration and community betterment project to grow the heritage infrastructure in Tucker County.

Thanks to Sunrise Sanitation who supplied dumpsters for the work project, to the West Virginia Geological Survey who archived the core drill samples from the building; to Martin from Alpine Heritage who helped clean out the building – and again, to Past Respects, for their great job! 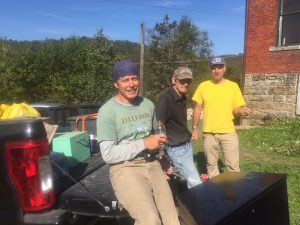 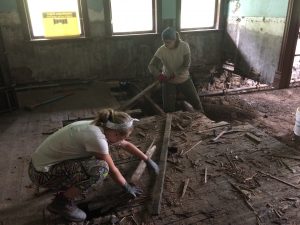 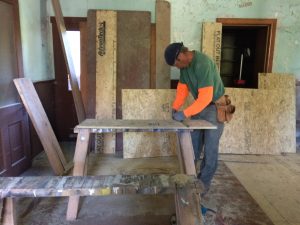