On July 1st, over 70 people packed Cottrill’s Opera House to learn about the history of immigration in Tucker County. The lecture, sponsored by Friends of Blackwater, was led by Professor Hal Gorby of West Virginia University, who has worked with his students to digitize oral history recordings from north central West Virginia, including first-hand accounts of the boom days of Thomas and the surrounding area.

The main waves of immigrants came into Tucker County in the late 1800s and early 1900s, departing mostly from Italy and Eastern Europe. The new arrivals worked in the timber and coal industry, and some saved up their money to open small businesses, putting their names on signs along Front Street.

The lecture covered large-scale issues like the difficulty of union organizing in company towns, the dangers of early coal mining, and the way that an influx of Catholic immigrants reshaped religious life in Thomas. However, Professor Gorby also picked out stories of individual immigrants, and highlighted original documents like certificates of citizenship, union flyers, and letters from important figures of the era.

Many people in the crowd had stories about their own ancestors’ immigrant experiences, and the conversation continued after the lecture was finished. We thank everyone who attended for being such an engaged audience! 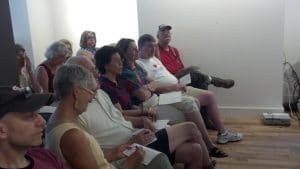 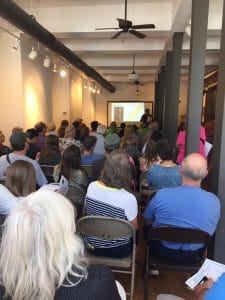