Friends of Blackwater is working to clean up acid mine drainage and improve watershed health.

On Friday November 15th, Friends of Blackwater hosted a meeting with some members of the MD DNR, Frostburg GIS Center, the MD Office of Abandoned Mine Lands, and the WV DEP Watershed Improvement Branch to discuss the Kempton Mine Pool, an underground pool of water that is fed by West Virginia surface water that leaks into old mine tunnels that slope downward, eventually flowing into a large body of water that discharges into Maryland. The clean, high quality surface water mixes with air and dissolves pyrite underground to create ferrous iron and sulfuric acid, resulting in Acid Mine Drainage (AMD) as it flows out of the mine pool, creating unsuitable conditions for anything to live in and flowing into the Potomac River. Similarly, the Coketon Mine Pool is the acidic pool of water that discharges into the North Fork and pollutes the Blackwater River with a tremendous amount of dissolved heavy metals. The Kempton and Coketon Mine Pools are right next to each other, separated only by a barrier of unmined coal. 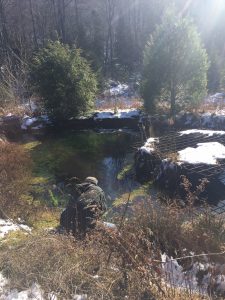 We discussed how FOB could take initiative to monitor along the North Branch of the Potomac, measuring stream flow and looking for spots where the water flow decreases, indicating that it is leaking into underground mine tunnels and adding to the AMD that enters the Potomac.

Paul Petzrick, MD DNR and power plant researcher, presented the idea of filling portions of the Kempton mine tunnels with a concrete created with inert fly ash from Mt Storm, specifically an underground railroad tunnel that is just beneath Kempton, MD. This would effectively block the AMD in the Kempton Mind Pool from discharging into Maryland and slowly fill up the mine tunnels where the water acidification is currently happening. That water would eventually make its way around the coal barrier and into the Coketon Mine Pool. This fly ash concrete technology may also prove beneficial for the WV Office of Abandoned Mine Lands, who is interested in filling smaller tunnels or crevices where water acidification takes place around the state. Mike Garner from MD AML at the Laurel Run Doser

While this sounds risky, we would actually expect to see water with a higher pH (better quality) discharging into the North Fork. The key to creating AMD is mixing water, pyrite, and AIR. If we flood the mine tunnels, the air would be removed from that equation, severely lessening the amount of heavy metals that would be dissolved into the water and discharged into the North Fork.

We are still many years away from flooding Kempton with concrete, but there are several steps that FOB could take to lessen the AMD flowing into the Potomac and improve the quality of water flowing into the North Fork and we are excited to have our foot in the door!