On August 4th, a small crowd gathered on the Blackwater Canyon Rail Grade in Hendricks to see a new historic marker unveiled. The marker explains the history of the railroad, once an important route for the timber and coal industries, as well as a major connection between the mountain and valley towns. The steepness of the grade made this section of the railroad a wonder of engineering when it was first built, and today the rail grade is a recreational trail used for hiking and biking. 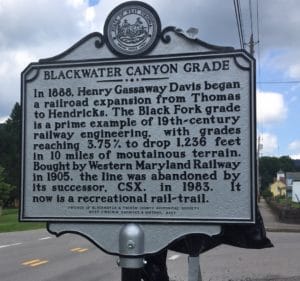 Local government officials gave short speeches, including Solena Roberts, who is the Mayor of Hendricks, and County Commissioners Lowell Moore and Diane Hinkle. All of the speakers emphasized the importance of remembering the past, and expressed a hope that the sign, and other projects like it, would encourage people to visit Hendricks. Although there hasn’t been a train running between Hendricks and Thomas since the 1980s, Hinkle noted that the rail grade still has potential to connect the towns.

Judy Rodd of Friends of Blackwater and Rose Davis of the Tucker County Historical Society also spoke. Both organizations, along with the Tucker County Landmarks Commission, contributed to the sign, which is an official West Virginia Highway Historical Marker. Davis used her remarks to encourage young people to learn about their local history. After the sign was unveiled, everyone went to the Hendricks Town Hall for refreshments.