The Underground Injection Public Hearing on March 5th in Parsons was a success! Over 50 concerned members of the public showed up at the Tucker Co Board of Education Gym. People came from Morgantown, Charles Town, Kingwood, Cheat Lake, and all over Tucker County. 15 of these attendees spoke up, voicing their opposition to this injection well permit renewal. 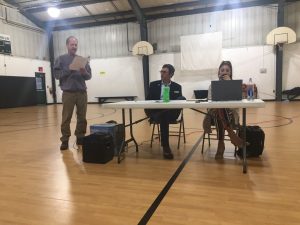 Landowners who would be affected by a spill spoke about concern over their farm land and reported feeling earthquakes in the area, fishermen spoke about the robust trout population which would be harmed by a spill into Horseshoe Run or the Cheat River, environmental groups, including Friends of Blackwater and Friends of the Cheat, listed issue after issue with the permit site and concerns for watershed health, and people who have lived near injection wells spoke about problems they had faced learning about the contents of the waste that was being injected into the earth next to their property and upstream of their homes.

Over 1,750 of you signed the petition demanding this public hearing and supporting FOB’s concerns about this injection well site, and hundreds of comments were added. Thank you for your active participation in these efforts to protect the Cheat Watershed from fracking pollution!