Among the weather headlines at the start of the New Year, we see that 2020 went into the weather record books as the fifth warmest year for the entire Lower 48 states since record-keeping started in 1895. The National Oceanic and Atmospheric Administration (NOAA) made that analysis based on observations from more than a thousand U. S. weather stations in NOAA’s Global Historical Climatology Network. In addition to the climate summary for the entire country, summaries were also prepared for every state and county, including Tucker County. 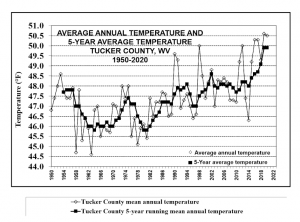 For the 40 years from that time to now, the five-year average temperature has risen at least four degrees, an enormous climate change in such a short time. Even more striking is that it has risen by more than two degrees in just the last decade. The graph shows that the warming is sometimes interspersed with brief retreats and pauses like the one in the past year, but the overall upward trend is unmistakable.

While the existence of climate warming cannot be denied, questions about why it’s happening and what impact it will have in the years ahead must be left to other experts. What’s being sought here is to point out the warming trend and provide some insight into the scope of it. One of the best tools for preparing graphs such as these is to obtain data from NOAA’s excellent “Climate at a Glace” website at https://www.ncdc.noaa.gov/cag/. It’s a storehouse of information that will be invaluable in tracking the progress of climate warming in the years ahead in a fact-based and transparent way.