On September 22nd, a volunteer event organized by Friends of Blackwater, in partnership with the Forest Service, improved the visibility of the historic roundhouse foundation, located along the Blackwater Canyon rail trail near Thomas.

The roundhouse was once used to turn trains arriving in Thomas around and send them back down the canyon. All that is left of the roundhouse today is its massive foundation, which shows today’s visitors the huge scale of industrial operations in the area.

The roundhouse foundations had been overgrown to the point where they were difficult to see from the rail trail, reducing the effectiveness of the new historic signs that Friends of Blackwater had installed in June to interpret the site. 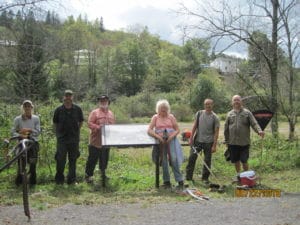 Volunteers Lucy Duff, Moriah Munsch, Angie Lipscomb, Tom Rodd, and Ira Rodd all worked to clear vegetation and make the structure visible from the trail. Forest Service archaeologists Gavin Hale and Jesse Morton were on hand to help with the work and provide historic information about the site.  The event was organized by Friends of Blackwater director Judy Rodd, and staffer Kate Leary, who also took part in clearing the old train maintenance area.

Film makers David and Melissa Rohm are working on a short film about the Blackwater area, and they filmed the beginning of the volunteer event. Thank you to everyone who participated! 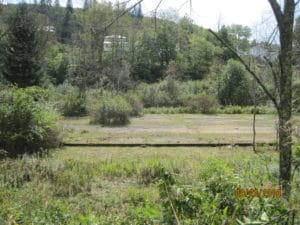